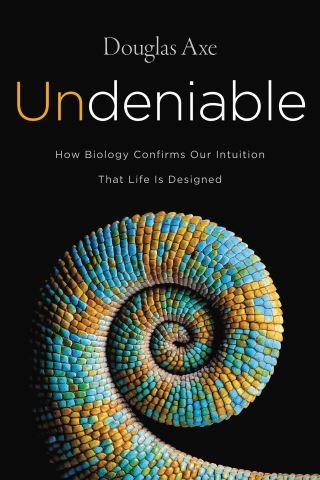 How Biology Confirms Our Intuition That Life Is Designed

Named A Best Book of the Year by World Magazine

Throughout his distinguished and unconventional career, engineer-turned-molecular-biologist Douglas Axe has been asking the questions that much of the scientific community would rather silence. Now, he presents his conclusions in this brave and pioneering book. Axe argues that the key to understanding our origin is the “design intuition”—the innate belief held by all humans that tasks we would need knowledge to accomplish can only be accomplished by someone who has that knowledge. For the ingenious task of inventing life, this knower can only be God.

Starting with the hallowed halls of academic science, Axe dismantles the widespread belief that Darwin’s theory of evolution is indisputably true, showing instead that a gaping hole has been at its center from the beginning. He then explains in plain English the science that proves our design intuition scientifically valid. Lastly, he uses everyday experience to empower ordinary people to defend their design intuition, giving them the confidence and courage to explain why it has to be true and the vision to imagine what biology will become when people stand up for this truth.

Armed with that confidence, readers will affirm what once seemed obvious to all of us—that living creatures, from single-celled cyanobacteria to orca whales and human beings, are brilliantly conceived, utterly beyond the reach of accident.

Our intuition was right all along.

Douglas Axe, PhD, is the director of Biologic Institute, a non-profit research organization launched by Discovery Institute in Seattle. After his undergraduate studies at UC Berkeley and doctoral work at Caltech, he held postdoctoral and research scientist positions at the University of Cambridge, the Cambridge Medical Research Council Centre, and the Babraham Institute in Cambridge. His work and ideas have been featured in many scientific journals, including the Journal of Molecular Biology, the Proceedings of the National Academy of Sciences, and Nature, and in such books as Signature in the Cell and Darwin’s Doubt by Stephen Meyer and Life’s Solution by Simon Conway Morris.