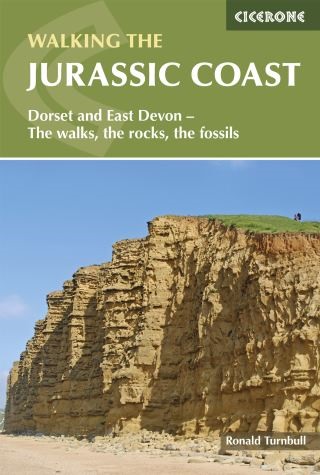 Dorset and East Devon - The walks, the rocks, the fossils

This guidebook describes 30 walking routes along the Devon-Dorset coast. The majority of the routes hug the shoreline between Torbay and Swanage, while others venture inland on the Dorset Downs. The walks range in length from 3 to 20 miles (5 to 33km) and are suitable for most walkers, with shorter routes alongside plenty of more challenging, full-day hikes. As well as detailed descriptions for every walk, accompanied by OS maps, there are details on available parking, points of interest along the way and advice on the terrain covered. The guide has been divided into areas: Devon's Red Beds, the Lias, Chesil Beach, Chalk walks (Lulworth and inland) and the Isle of Purbeck. The geological descriptions are accompanied by strata diagrams, geological timelines, explanations of the creation of the various sedimentary rocks along the coast, and discussion of how and why the various formations formed millennia ago. The incredible - yet readable - detail brings these walks and the landscape alive. The Jurassic Coast of Devon and Dorset, stretching between Exeter and Bournemouth, is a geological wonderland. Natural wonders like Chesil Beach, Durdle Door and fossils so numerous you'll be tripping over them, combine with southern England's rolling Downs, tiny villages, beaches and sunny summers to provide a stunning and awe-inspiring landscape to explore.

Ronald Turnbull: Ronald Turnbull was born in St Andrews, Scotland, into an energetic fellwalking family. His grandfather was a president of the Scottish Mountaineering Club, and a more remote ancestor was distinguished as only the second climbing fatality in Snowdonia. In 1995 Ronald won the Fell Running Association's Long-distance Trophy for a non-stop run over all the 2000ft hills of Southern Scotland; his other proud achievements include the ascent of the north ridge of the Weisshorn and a sub-2hr Ben Nevis race. He enjoys multi-day treks, through the Highlands in particular, and has made 21 different coast-to-coast crossings of the UK. He has also slept out, in bivvy bag rather than tent, on over 80 UK summits. Outside the UK he likes hot, rocky areas of Europe, ideally with beaches and cheap aeroplanes. Recently he achieved California's 220-mile John Muir Trail and East Lothian's 45-mile John Muir Way in a single season, believing himself the first to have achieved this slightly perverse double. He has also started trying to understand the geology of what he's been walking and climbing on for so long. Ronald lives in the Lowther Hills of Dumfriesshire, and most of his walking, and writing, takes place in the nearby Lake District and in the Scottish Highlands. His recent books include The Book of the Bivvy, and walking/scrambling guides Loch Lomond and the Trossachs, The Cairngorms and Ben Nevis & Glen Coe, as well as Three Peaks Ten Tors a slightly squint-eyed look at various UK challenge walks. He has seven times won Outdoor Writers & Photographers Guild Awards for Excellence for his guidebooks, outdoor books (including Book of the Bivvy), and magazine articles. He has a regular column in Lakeland Walker and also writes in Trail, Cumbria and TGO (The Great Outdoors). His current, hopelessly ambitious, project is to avoid completing the Munros for at least another 20 years.