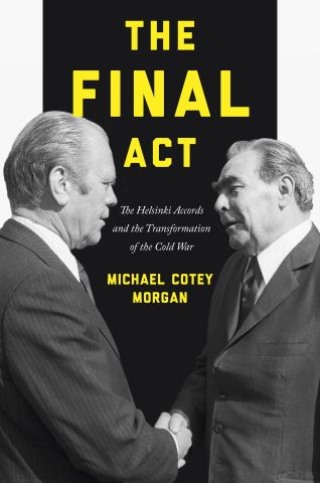 The Helsinki Accords and the Transformation of the Cold War

The Helsinki Final Act was a watershed of the Cold War. Signed by thirty-five European and North American leaders at a summit in Finland in the summer of 1975, the agreement presented a vision for peace based on common principles and cooperation across the Iron Curtain. The Final Act is the first in-depth account of the diplomatic saga that produced this historic agreement. Drawing on research in eight countries and multiple languages, this gripping book explains the Final Act’s emergence from the parallel crises of the Soviet bloc and the West during the 1960s, the strategies of the major players, and the conflicting designs for international order that animated the negotiations.

Helsinki had originally been a Soviet idea. But after nearly three years of grinding negotiations, the Final Act reflected liberal democratic ideals more than communist ones. It rejected the Brezhnev Doctrine, provided for German reunification, endorsed human rights as a core principle of international security, committed countries to greater transparency in economic and military affairs, and promoted the freer movement of people and information across borders. Instead of restoring the legitimacy of the Soviet bloc, Helsinki established principles that undermined it.

The definitive history of the origins and legacy of this important agreement, The Final Act shows how it served as a blueprint for ending the Cold War, and how, when that conflict finally came to a close, the great powers established a new international order based on Helsinki’s enduring principles.