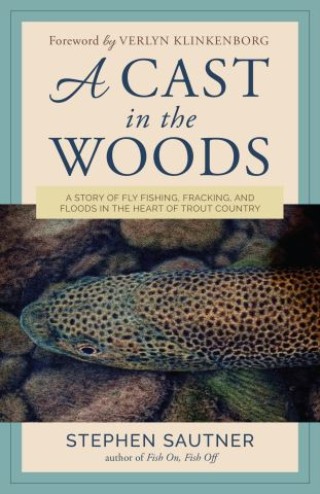 A Cast in the Woods

A Story of Fly Fishing, Fracking, and Floods in the Heart of Trout Country

When angler and author Stephen Sautner bought a streamside cabin and some land in the heart of fly fishing country in the Catskill Mountains, he thought he had finally reached angling nirvana and would be able to fish whenever he felt like it. Little did he know what loomed: a series of historical floods, a land rush over fracking for natural gas, and constant battles with invasive species, plagues of caterpillars, and other pests. He takes on all of these threats – between casts for wild trout and other gamefish – and along the way gains a better understanding of stewardship and the interconnectedness between angling and the natural world.

Stephen Sautner: Ever since he saw his older brother lose an enormous summer flounder off a dock at the New Jersey Shore when he was 12 years old, Stephen Sautner has been trying to catch fish. Any fish. This has led him to the Falkland Islands where he cast for sea trout next to an active mine field, to the Zambezi River where three-ton elephants guarded pools filled with tiger fish and Nile crocodiles. In 2007, he edited Upriver and Downstream, an anthology of fishing stories from the "Outdoors" column of The New York Times, and has been an active contributor to the column since 1994. His stories have also appeared in The New York Times Magazine, Fly Rod & Reel, Wildlife Conservation, and Underwater Naturalist. Along with Sautner’s 15 years of contributing to the NY Times, he is also the director of communications for the Wildlife Conservation Society at the Bronx Zoo, where he publicizes the Society’s conservation programs.