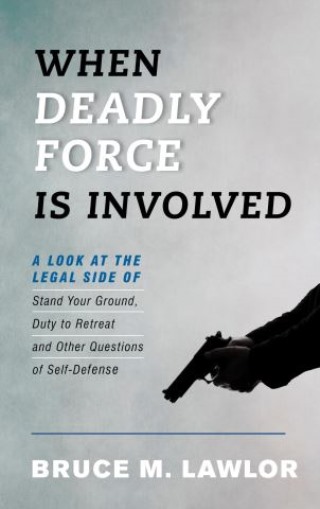 When Deadly Force Is Involved

A Look at the Legal Side of Stand Your Ground, Duty to Retreat and Other Questions of Self-Defense

Self-defense, as a legal concept, is easy to describe but difficult to apply. Generally, a person who is without fault may use reasonable force or defensive force for the purpose of defending one's own life or the lives of others, including, in certain circumstances, the use of deadly force, provided there is no reasonable alternative to avoid it. When someone begins to parse the words of this description, however, he or she runs immediately into a maze of self-defense laws that appear to be at odds with each other.

Bruce Lawlor clears up the confusion by identifying the major issues that surface in most self-defense cases and by describing how the law has dealt with them historically. Its purpose is not to provide legal advice, but to illuminate the path that must be taken to decide whether a claim of self-defense is valid. It examines a variety of issues, including the duty to retreat and stand-your ground laws, what is a deadly threat, when is fear of mortal danger reasonable, and even what happens when a person mistakenly shoots some in self-defense.

When Deadly Force Is Involved: A Look at the Legal Side of Stand Your Ground, Duty to Retreat and Other Questions of Self-Defense brings a bit of order to the confusion behind self-defense.

Bruce M. Lawlor: Bruce Lawlor, retired as a Major General from the U.S. Army, has extensive military and civilian experience in the security sector. He works with national, state, local, and private sector executives to enhance organizational and individual security. As an attorney, he represented both police officers and criminal defendants, in civil and criminal litigation, to include arguing successfully a claim of self-defense in a murder case. Mr. Lawlor is a certified firearms instructor, and teaches individual self-defense. He conducted research regarding the rules of engagement for the use of small arms, relating to U.S. Army operations in heavily populated, civilian conflict areas. He is a Harvard National Security Fellow.