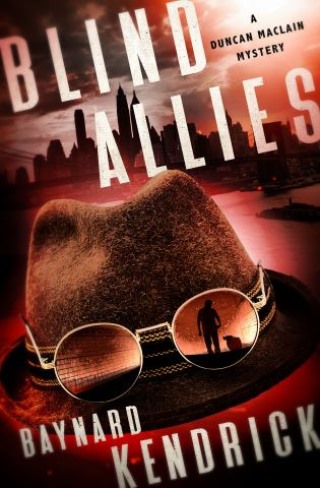 A blind detective may be walking into a trap—but he’s not the one who should be scared—in this mystery by the author of You Die Today!

Following the loss of his sight in World War I, ex–intelligence officer Capt. Duncan Maclain honed his other senses and became one of the most successful and well-known private investigators in New York City . . .

A party in celebration of Maclain’s seventh wedding anniversary is in full swing at his Manhattan penthouse when a wealthy potential client stops by. The president and treasurer of Markham Oil, Claude Markham offers Maclain a hefty sum to help him collect some papers from a safe in his father’s office. The numbers on the combination dial are in braille, and Markham’s late mother was the only person who could read them.

The sightless sleuth can sense something is off about this mysterious tycoon, but his curiosity won’t let him say no. Even though Markham may not be who he says he is, Maclain accepts the job. With his trusty two German Shepherds at his side, Captain Maclain heads to the Markham mansion—and that’s when the real fun begins . . .

Baynard Kendrick was the first American to enlist in the Canadian Army during World War I. While in London, he met a blind English soldier whose observational skills inspired the character of Capt. Duncan Maclain. Kendrick was also a founding member of the Mystery Writers of America and winner of the organization’s Grand Master Award.

Baynard Kendrick:
Baynard Kendrick (1894–1977) was one of the founders of the Mystery Writers of America, later named a Grand Master by the organization. After returning from military service in World War I, Kendrick wrote for pulp magazines such as Black Mask and Dime Detective Magazine under various pseudonyms before creating the Duncan Maclain character for which he is now known. The blind detective appeared in twelve novels, several short stories, and three films.