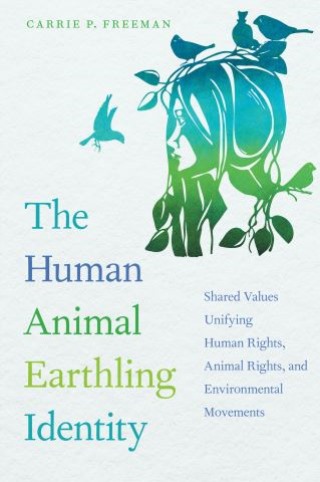 With The Human Animal Earthling Identity Carrie P. Freeman asks us to reconsider the devastating division we have created between the human and animal conditions, leading to mass exploitation, injustice, and extinction. As a remedy, Freeman believes social movements should collectively foster a cultural shift in human identity away from an egoistic anthropocentrism (human-centered outlook) and toward a universal altruism (species-centered ethic), so people may begin to see themselves more broadly as “human animal earthlings.”

To formulate the basis for this identity shift, Freeman examines overlapping values (supporting life, fairness, responsibility, and unity) that are common in global rights declarations and in the current campaign messages of sixteen global social movement organizations that work on human/civil rights, nonhuman animal protection, and/or environmental issues, such as Amnesty International, Human Rights Watch, CARE, People for the Ethical Treatment of Animals, the World Wildlife Fund, the Sea Shepherd Conservation Society, the Nature Conservancy, the Rainforest Action Network, and Greenpeace. She also interviews the leaders of these advocacy groups to gain their insights on how human and nonhuman protection causes can become allies by engaging common opponents and activating shared values and goals on issues such as the climate crisis, enslavement, extinction, pollution, inequality, destructive farming and fishing, and threats to democracy.

Carrie P. Freeman: CARRIE P. FREEMAN is a professor of communication at Georgia State University and the author of Framing Farming: Communication Strategies for Animal Rights.