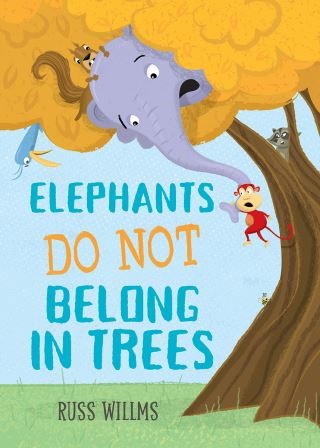 Elephants Do Not Belong in Trees

Elephants do not belong in trees. It’s not natural. It makes other animals uncomfortable. This is the story of Larry, an elephant who wanted to live in a tree. This is a story about being the new kid and being a little bit different (okay, A LOT different). A story about acceptance and making friends. When Larry decides he wants to live in the big bushy tree in the middle of the wide-open field, the current residents, Bird, Squirrel and Monkey, are not very welcoming. They throw nuts at him and peck at his head; they tell him to leave and are downright rude. But Larry persists—why can’t he live in the tree? When his new home is threatened by something much bigger than all the animals combined, Larry shows everyone that he cares just as much about the tree as they do.

Russ Willms has always had a passion for art and fun. His work as an ad executive and designer has been featured in hundreds of magazines, books and ad campaigns throughout the world. He is the illustrator of the Mr. Christie Book Award Gold–winning and Governor General's Award finalist Brewster Rooster. Russ lives in Victoria, British Columbia.