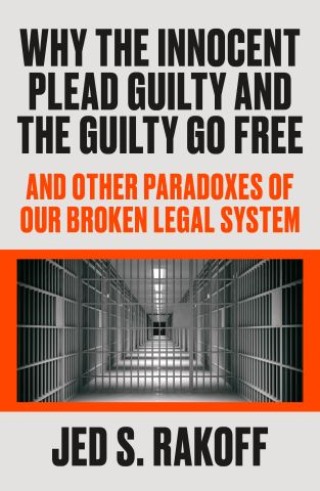 Why the Innocent Plead Guilty and the Guilty Go Free

And Other Paradoxes of Our Broken Legal System

A senior federal judge’s incisive, unsettling exploration of some of the paradoxes that define the judiciary today, Why the Innocent Plead Guilty and the Guilty Go Free features essays examining why innocent people plead guilty, why high-level executives aren’t prosecuted, why you won’t get your day in court, and why the judiciary is curtailing its own constitutionally mandated power.

How can we be proud of a system of justice that often pressures the innocent to plead guilty? How can we claim that justice is equal when we imprison thousands of poor Black men for relatively modest crimes but rarely prosecute rich white executives who commit crimes having far greater impact? How can we applaud the Supreme Court’s ever-more-limited view of its duty to combat excesses by the president?

The federal judge Jed S. Rakoff, a leading authority on white-collar crime, explores these and other puzzles in Why the Innocent Plead Guilty and the Guilty Go Free, a startling account of our broken legal system. Grounded in Rakoff’s twenty-four years as a federal trial judge in New York in addition to the many years he worked as a federal prosecutor and criminal defense lawyer, Rakoff ’s assessment of our justice system illuminates some of our most urgent legal, social, and political issues: plea deals and class-action lawsuits, corporate impunity and the death penalty, the perils of eyewitness testimony and forensic science, the war on terror and the expanding reach of the executive branch. A fundamental problem, he reveals, is that the judiciary is constraining its own constitutional powers.

Like few others, Rakoff understands the values that animate the best aspects of our legal system—and has a close-up view of our failure to live up to these ideals. But he sees within this gap great opportunities for practical reform, and a public mandate to make our justice system truly just.

Judge Jed S. Rakoff: JED S. RAKOFF is a senior judge of the United States District Court for the Southern District of New York and an adjunct professor at both Columbia University Law School and New York University Law School. Since going on the bench in 1996, Rakoff has authored more than 1,800 judicial opinions. He has served as a commissioner for the National Commission on Forensic Science and as cochair of the National Academy of Sciences’ committee on eyewitness identification. He has also assisted the U.S. Departments of Commerce and State in training judges in a dozen countries. Rakoff is a regular contributor to The New York Review of Books. In 2014, he was listed by Fortune magazine as one of the World’s 50 Greatest Leaders.