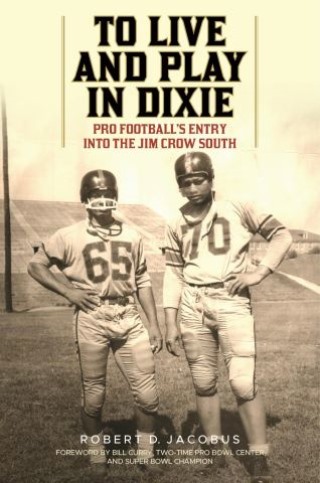 To Live and Play in Dixie

While the story of the reintegration of professional football in 1946 after World War II is a topic that has been covered, there is a little-known aspect of this integration that has not been fully explored.

After World War II and up until the mid- to late 1960s, professional football teams scheduled numerous preseason games in the South. Once African American players started dotting the rosters of these teams, they had to face Jim Crow conditions. Early on, black players were barred from playing in some cities. Most encountered segregated accommodations when they stayed in the South. And when African Americans in these southern cities came to see their favorite black players perform, they were relegated to segregated seating conditions.

To add to the challenges these African American players and fans endured, professional football gradually started placing franchises in still-segregated cities as early as 1937, culminating with the new AFL placing franchises in Dallas and Houston in 1960. That same year, the NFL followed suit by placing a franchise in Dallas. Now, instead of just visiting a southern city for a day or so to play an exhibition game, African American players that were on the rosters of these southern teams had to live in these still segregated cities. Many of these players, being from the North or West Coast, had never dealt with de jure or even de facto Jim Crow laws.

Early on, if these African American players didn’t “toe the line” or fought back (via contract disputes, interracial relationships, requesting better living accommodations in the South, protesting segregated seating, etc.), they were traded, cut, and even blackballed from the league. Eventually, though, as the civil rights movement gained steam in the 1950s and 1960s, African American players were able to protest the conditions in the South with success. Much of what happened in professional football during this time period coincided with or mirrored events in America and the civil rights movement.

Robert D. Jacobus is a former Texas public school teacher and coach who holds an MA in History from the University of Houston. He has taught history at Houston Community College, Lone Star College, Wharton County Junior College, and is currently an adjunct history professor at Stephen F. Austin State University in Nacogdoches, Texas. He has been researching the story of black pro footballers in the Jim Crow South for more than three years. The author has extensive media experience with television, radio, newspaper, and magazine interviews and hosts a website that is regularly updated to help with the promotion of his writing. He and his wife live in Village Mills, Texas.