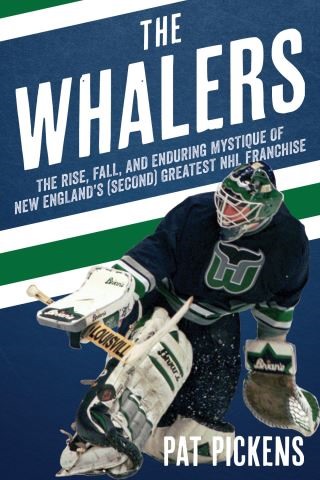 More than twenty years after departing Hartford, Connecticut, for Raleigh, North Carolina, the NHL's Whalers continue to inspire passion among fans. As HartfordBusiness.com reported in 2015, "Whalers merchandise...still has a cult following not only among fans in Connecticut but around the country." But Whalers devotees aren't just clamoring for jerseys, hats and t-shirts. They're nostalgic for a team that had New England roots for nearly 25 years--in Boston, Springfield, and Hartford--and featured some of the greatest players in NHL history, including Gordie Howe (with his sons Mark and Marty), Bobby Hull, and Ron Francis.

Pat Pickens’s book details the Whalers’ origin in Boston in 1972, the team’s WHA championship in 1973, the roof collapse of their home arena that indirectly led to their entrance to the NHL in 1979, their stunning NHL playoff-series win against the top-seeded Quebec Nordiques in 1986, the 1986-87 season when they claimed their first division championship, and their relocation south in 1997 as the Carolina Hurricanes. Pickens imagines a Stanley Cup delivered to hockey-crazed Hartford in 2006, when the Hurricanes instead brought it home to North Carolina. The book also explores the likelihood of an NHL team returning to the Nutmeg State.

Patrick Pickens: Pat Pickens is a writer for NHL.com. Previously, he was an editorial producer for MLB.com and a freelance sportswriter for The New York Times. From 2008 to 2013 he was sports editor at the Fairfield Citizen in Connecticut. He now lives in Jersey City, NJ.