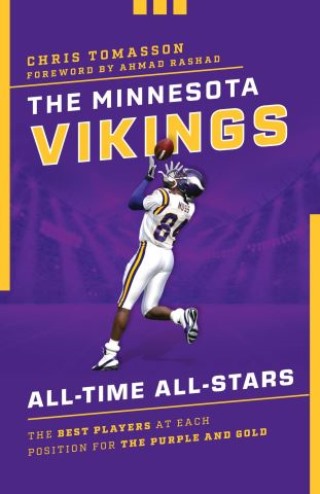 The Best Players at Each Position for the Purple and Gold

Let’s say you’re the coach of the Minnesota Vikings, deciding which players should start in a Super Bowl matchup against the toughest team in the AFC. But instead of choosing from the current roster, you have every player in the team’s 60-year history in your locker room. Who starts at quarterback: scrambling Fran Tarkenton, gunslinger Daunte Culpepper, or deadly accurate Kirk Cousins? At defensive end, do you play fearsome Carl Eller, fan favorite Jared Allen, sack specialist Chris Doleman, or stalwart Jim Marshall? Combining career stats, common sense, and a host of intangibles, veteran sportswriter Chris Tomasson imagines an embarrassment of riches and sets the all-time All-Star Vikings lineup for the ages.

Chris Tomasson: Chris Tomasson has covered the NFL since 2011, including the Minnesota Vikings since 2013 with the St. Paul Pioneer Press. Before that, he covered the NBA for the Akron Beacon Journal, Rocky Mountain News, AOL FanHouse and Fox Sports Florida.