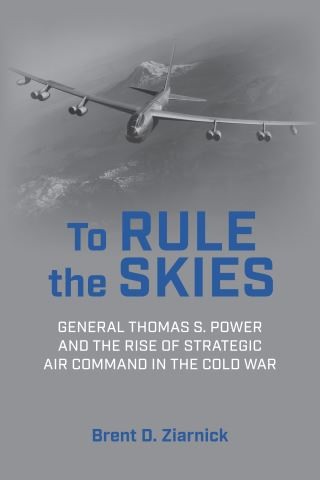 To Rule the Skies

General Thomas S. Power and the Rise of Strategic Air Command in the Cold War

General Power: Strategic Air Command in the Cold War fills a critical gap in Cold War and Air Force history by telling the story of General Thomas S. Power for the first time. Thomas Power was second only to Curtis LeMay in forming the Strategic Air Command (SAC), one of the premier combat organizations of the twentieth century, but he is rarely mentioned today. What little is written about Power describes him as LeMay’s willing hatchet man—uneducated, unimaginative, autocratic, and sadistic. Based on extensive archival research, General Power seeks to overturn this appraisal. Brent D. Ziarnick covers the span of both Power’s personal and professional life and challenges many of the myths of conventional knowledge about him. Denied college because his middle-class immigrant family imploded while he was still in school, Power worked in New York City construction while studying for the Flying Cadet examination at night in the New York Public Library. As a young pilot, Power participated in some of the Army Air Corps’ most storied operations. In the interwar years, his family connections allowed Power to interact with American Wall Street millionaires and the British aristocracy. Confined to training combat aircrews in the United States for most of World War II, Power proved his combat leadership as a bombing wing commander by planning and leading the firebombing of Tokyo for Gen. Curtis LeMay. After the war, Power helped LeMay transform the Air Force into the aerospace force America needed during the Cold War. A master of strategic air warfare, he aided in establishing SAC as the Free World’s “Big Stick” against Soviet aggression. Far from being unimaginative, Power led the incorporation of the nuclear weapon, the intercontinental ballistic missile, the airborne alert, and the Single Integrated Operational Plan into America’s deterrent posture as Air Research and Development Command commander and both the vice commander and commander-in-chief of SAC. Most importantly, Power led SAC through the Cuban Missile Crisis in 1962. Even after retirement, Power as a New York Times bestselling author brought his message of deterrence through strength to the nation. Ziarnick points out how Power’s impact may continue in the future. Power’s peerless, but suppressed, vision of the Air Force and the nation in space is recounted in detail, placing Power firmly as a forgotten space visionary and role model for both the Air Force and the new Space Force. General Power is an important contribution to the history of the Cold War and beyond.