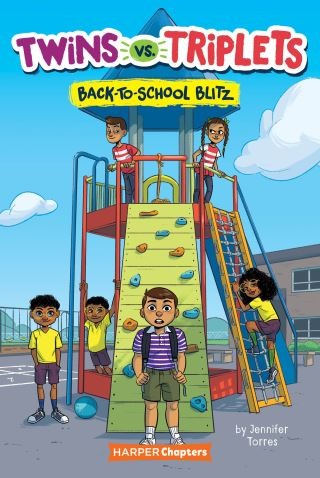 David Suárez gets stuck in the middle of a prank war when the neighborhood twins and triplets compete to rule the school. This is the first book of this hilarious, highly illustrated early chapter book series.

David can’t wait to go back to school and get far away from his trickster neighbors. But he’s in for a surprise when a set of equally prank-loving triplets move onto his block—and into his class!

Now the twins and triplets are battling for control of the playground and David is stuck in the middle. Can he end the prank war before recess gets cancelled for the whole year?

HarperChapters build confident readers one chapter at a time! With short, fast-paced books, art on every page, and milestone markers at the end of every chapter, they're the perfect next step for fans of I Can Read!

Jennifer Torres's debut picture book, Finding the Music, was published by Lee & Low Books in spring 2015, and her middle grade novel Stef Soto, Taco Queen was published by  Little, Brown Books for Young Readers in fall 2016. She works at University of the Pacific, where she leads a countywide campaign to promote early literacy. Before joining Pacific, Jennifer worked as a reporter for The Record newspaper, covering education, children, and families, and she continues to write for local and national magazines. Originally from Southern California, she has lived in the Central Valley for the past 10 years with her husband, David, and daughters Alice and Soledad.