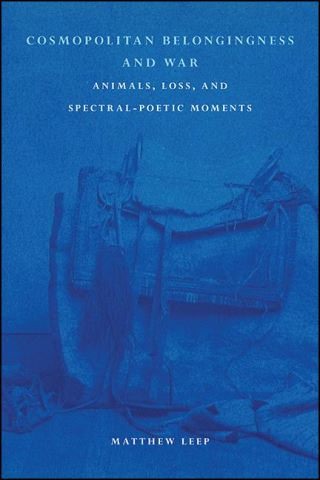 In Cosmopolitan Belongingness and War, Matthew Leep develops a cosmopolitan account of war that blends sharp inquiry into interspecies politics with original poetry on animals, loss, and war. Informed by the works of Jacques Derrida, this book is not only a somber and sobering exploration of the loss of animal lives during the Iraq War—from the initial US invasion to later struggles with ISIS—but also an imaginative tracing of animal experiences in "spectral-poetic moments." By emphasizing elegies, poetic space, and multispecies belonging, Leep envisions the cosmopolitan text as a hybrid form of critical and poetic engagement with animal others. An insightful mix of cosmopolitan poetics, poetry, and analysis of the Iraq War in its multispecies entanglements, Cosmopolitan Belongingness and War connects contemporary concerns with political violence, memory, and interspecies politics to imagine a more spectral, posthumanist, and poetic cosmopolitanism. Interdisciplinary in scope, this book will engage scholars of international relations, political theory, US foreign policy, animal studies, poetry, and Derrida, as well as those interested in human-animal relations in perilous times.