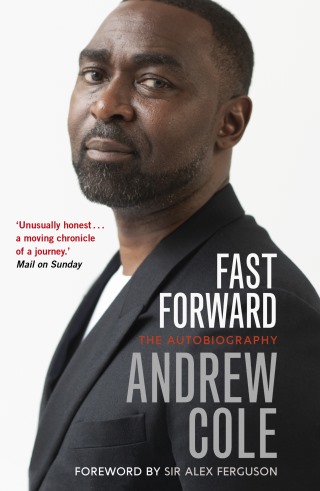 The Hard Road to Football Success

'A powerful and moving book - it's quite a battle he has faced' Nick Robinson, BBC Radio 4 Today Programme

'It really is an interesting read' Dan Walker, BBC Breakfast

Misconceptions have stalked Andy Cole like a hatchet-man defender determined to cut him down to size. Now, in his candid and inspirational autobiography, Cole finally puts his side of the story.

In the world of modern-day football, Andy Cole's reserved demeanour, combined with belief in his own ability, was often interpreted as an attitude problem that overshadowed his natural aptitude for goalscoring. Throughout his glittering career, he scored 187 Premier League goals, won 5 Premier League titles and 1 Champions League trophy.

Now, two decades on from United's historic Treble, he not only gives the inside track on Eric Cantona, Roy Keane, Dwight Yorke and other members of that illustrious side, but also opens up about his fractious relationship with Teddy Sheringham and reveals the prejudices and preconceptions he had to contend with in his twenty years in the game.

Compelling in its honesty and frankness, Fast Forward is the thought-provoking story of one man's determination to succeed and survive against all the odds.

Andrew Cole was born in Nottingham in 1971. His career began at Arsenal but having made only a handful of first team appearances he went out on loan, firstly to Fulham and then to Bristol City.

In 1992, he made a permanent move to Bristol, and having scored over 20 goals in a matter of months he was signed by Newcastle, where he became a hugely popular figure, scoring a club record 41 goals in the 1993/94 season.

In January 1995, Cole was signed by Manchester United. At Old Trafford, he went on to have an outstanding seven years, scoring 121 goals in 275 games, winning five Premier League titles, two F.A Cups and the Champions League.

In late 2001, Cole signed for Blackburn Rovers where he won the League Cup before finishing his career at a number of clubs including Manchester City and Sunderland. He retired in 2008 having scored 187 Premier League goals (a feat only bettered by Alan Shearer and Wayne Rooney). In 2015, Cole suffered renal failure and two years later he had a kidney transplant.

He now enjoys his role as club ambassador at Manchester United.