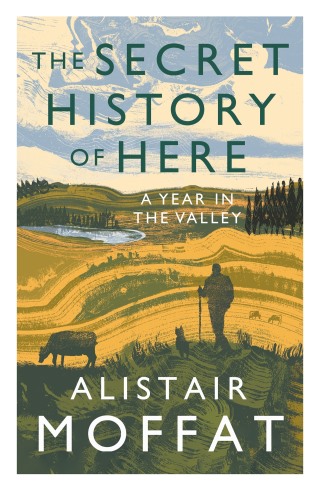 The Secret History of Here

A Year in the Valley

The Secret History of Here is the story of a single place, a farm in the Scottish Borders. The site on which Alistair Moffat's farm now stands has been occupied since pre-historic times. The fields have turned up ancient arrow heads, stone spindles, silver pennies and a stone carved with the rune-like letters of Ogham. Walking this landscape you can feel the presence and see the marks of those who lived here before. But it is also the story of everywhere. In uncovering the history of one piece of land, Moffat shows how history is all around us, if only we have the eyes to see it. Under our feet, carved into the landscape, in the layout of paths and roads, in the stories we pass down, our history leaves its trace on the land. Taking the form of a journal of a year, The Secret History of Here is a walk through the centuries as much as the seasons. We hear the echo of battles long since fought, of lives lived quietly or scandalously, of armies, of kings, of the common folk who mostly inhabited this land, and a little of those that live here now.

Alistair Moffat: Alistair Moffat was born in Kelso, Scotland in 1950. He is an award winning writer, historian and Director of Programmes at Scottish Television, former Director of the Edinburgh Festival Fringe, and former Rector of the University of Saint Andrews. He is the founder of Borders Book Festival and Co-Chairman of The Great Tapestry of Scotland.