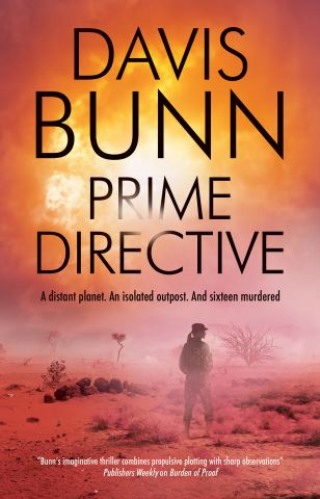 Lieutenant Amanda Bostick is ordered to investigate why scientists on a distant outpost on the planet of Lorian are being murdered with no alarm raised.

"In the past ninety days, sixteen colonists have been murdered, and nobody thought to report it until now?"

When a number of scientists are mysteriously killed on an insignificant scientific outpost on the planet of Loria and no alarm is raised, Commander Rickets of the Galactic Space Arm (GSA) is angered that no one can explain why. Rickets orders Lieutenant Amanda Bostick along with two armed Guardians, Sergeant Hamoud and Corporal Nasim, to investigate.

All three have faced setbacks in their careers and time is against them: the GSA is demanding answers within ten days. But they have no idea what to expect as there are few reports on the planet.

Why are the scientists being killed? Is there more to the mission than first appears? Are the sentient Lorians who inhabit the planet more of a threat than the GSA realize?

Davis Bunn: Davis Bunn is a best-selling author with more than eight million books in print. Davis was first published in 1990 and has gone on to have a prolific career with the release of over seventy books across twenty languages. He was born in North Carolina but now lives in Oxfordshire, England, and serves as writer-in-residence at Regent's Park College, University of Oxford. He has won the Christy Award four times and is a member of their Hall of Fame. In 2011 he won the Library Journal Best Book of the Year for Lion of Babylon. Davis also publishes under the pseudonym of Thomas Locke.