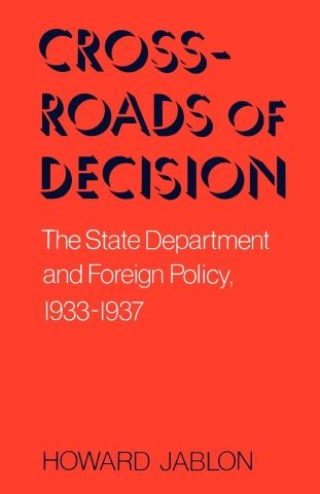 In this provocative interpretation of New Deal diplomacy, Howard Jablon challenges the view that the State Department was wiser and more expert at international maneuver than was President Franklin D. Roosevelt in the early years of his presidency. These were years of growing world tension, with the preliminary shots of World War II being fired as Japan took over Manchuria, Italy made Ethiopia an extension of its new Roman Empire, and all the European great powers tried out their new weaponry in Spain. The author argues that the department's advice in this period actually led to unfortunate decisions which later had a considerable impact on events leading to World War II.

Former Secretary of State Cordell Hull wrote in his memoirs that the United States was at the "oriental crossroads of decision" in 1934. Hull and his colleagues in the State Department did not suggest blocking the Japanese. Instead, they recommended continuing the ineffective nonrecognition policy. Consequently, the roads taken by American diplomacy at this and other junctures were equally unfortunate.

To date no one has criticized the influence of the State Department on New Deal diplomacy. Crossroads of Decision represents a timely and important contribution to our understanding of both the State Department and foreign policy in this interwar period of rapid change, when diplomatic courses were set that allowed for no turning back.