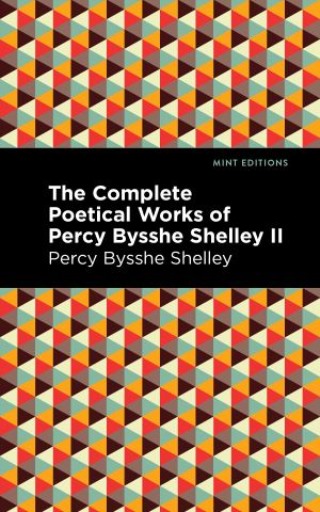 The Complete Poetical Works of Percy Bysshe Shelley Volume II (1914) compiles some of Percy Bysshe Shelley’s best-known works as a leading poet, playwright, and political thinker of the nineteenth century. As a leading figure among the English Romantics, Shelley was a master of poetic form and tradition who recognized the need for radical change in the social order. His work has influenced such writers and intellectuals as Karl Marx, Mahatma Gandhi, W. B. Yeats, and George Bernard Shaw. In “Ozymandias,” Shelley employs the language of archaeology to mask one of the greatest political poems of all time. The sonnet depicts a statue of an ancient king discovered in the Egyptian desert. Barely visible above the shifting sand, its pedestal reads “‘My name is Ozymandias, king of kings: / Look on my works, ye Mighty, and despair!’” Juxtaposed with this language of bluster, the three remaining lines dispel the myth of power with expert precision: “Nothing beside remains. Round the decay / Of that colossal wreck, boundless and bare / The lone and level sands stretch far away.” For Shelley, who identifies with the knowing, mischievous sculptor, the dominion of kings is nothing but hubris, a grain of sand in the vast expanse of time. In “To a Skylark,” Shelley immortalizes the song of a bird heard once and remembered forever: “The blue deep thou wingest, / And singing still dost soar, and soaring ever singest.” As he longs to know the bird in order to mimic the celebratory nature of its song, Shelley reaches an understanding of the human condition, the tragic temperament of those who “look before and after, / And pine for what is not.” Unlike the poet, who must struggle to achieve his song, the skylark soars and sings and remains above the world of men, whose “sweetest songs are those that tell of saddest thought.” With a beautifully designed cover and professionally typeset manuscript, this edition of Percy Bysshe Shelley’s The Complete Poetical Works of Percy Bysshe Shelley Volume II is a classic of English literature reimagined for modern readers.

Percy Bysshe Shelley (1792-1822) was an English Romantic poet. Born into a prominent political family, Shelley enjoyed a quiet and happy childhood in West Sussex, developing a passion for nature and literature at a young age. He struggled in school, however, and was known by his colleagues at Eton College and University College, Oxford as an outsider and eccentric who spent more time acquainting himself with radical politics and the occult than with the requirements of academia. During his time at Oxford, he began his literary career in earnest, publishing Original Poetry by Victor and Cazire (1810) and St. Irvine; or, The Rosicrucian: A Romance (1811) In 1811, he married Harriet Westbrook, with whom he lived an itinerant lifestyle while pursuing affairs with other women. Through the poet Robert Southey, he fell under the influence of political philosopher William Godwin, whose daughter Mary soon fell in love with the precocious young poet. In the summer of 1814, Shelley eloped to France with Mary and her stepsister Claire Claremont, travelling to Holland, Germany, and Switzerland before returning to England in the fall. Desperately broke, Shelley struggled to provide for Mary through several pregnancies while balancing his financial obligations to Godwin, Harriet, and his own father. In 1816, Percy and Mary accepted an invitation to join Claremont and Lord Byron in Europe, spending a summer in Switzerland at a house on Lake Geneva. In 1818, following several years of unhappy life in England, the Shelleys—now married—moved to Italy, where Percy worked on The Masque of Anarchy (1819), Prometheus Unbound (1820), and Adonais (1821), now considered some of his most important works. In July of 1822, Shelley set sail on the Don Juan and was lost in a storm only hours later. His death at the age of 29 was met with despair and contempt throughout England and Europe, and he is now considered a leading poet and radical thinker of the Romantic era.