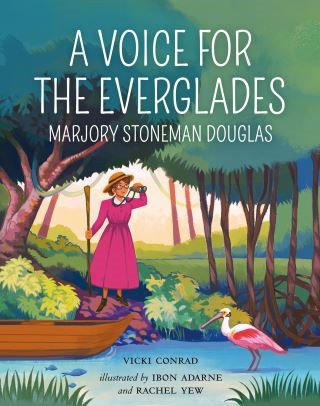 A Voice for the Everglades

The Florida Everglades are made up of nine different ecosystems supporting an astonishing variety of wildlife—panthers, manatees, snails, frogs, and a rainbow of bird species. But for years, the Everglades were threatened. They needed a voice to speak up for them. Marjory Stoneman Douglas became that voice. Her book "A River of Grass" helped the world see the irreplaceable beauty and value of the Everglades. Marjory’s activism led to the creation of a national park and dedicated conservation efforts, and throughout her long life she inspired countless people to use their voices to make a difference.

Vicki Conrad is a teacher as well as a writer. Her first book, Just Like Beverly, was a Junior Library Guild Selection. Growing up, she was always found with a book in her hand, and she has stayed that way ever since.