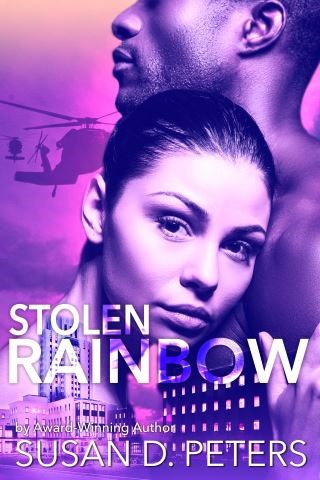 WHAT HAPPENS WHEN THE RAINBOW EXPLODES?

The life of Marine Captain Jewel Dubuclet is thrust into shambles when on routine patrol in Afghanistan her Humvee trips an IED wire. The result is death and devastating casualties for her men, and for Jewel, the loss of her right leg. She is airlifted to safety and a state-of-the-art rehabilitation hospital, but her recovery is stalled. Feelings of shame, guilt, and a loss of her physical identity thrust her into depression. Assisted by a skillful psychologist, who connects the suffering captain to the valor of an historic warrior Queen, and the tenacity of her driving physical trainer, Jewel gradually accepts her new normal and the unforeseen promise of love it brings.

Susan D Peters: Susan D. Peters, is a native of Chicago’s south side. Stolen Rainbow is her first novella. A second novella will be published by paperback romance giant Harlequin Books. Her first book, the spellbinding memoir, Sweet Liberia: Lessons from the Coal Pot, chronicling her eleven years in Liberia, West Africa, and their escape during the Liberian Civil War, received the 2010 Black Excellence Award for Non-Fiction by the African American Alliance of Chicago, and in 2011 the book was awarded a prize for Non-Fiction from the Illinois Woman's Press Association. Broken Dolls, Susan’s second novel, is the first of a series featuring the flawed Detective Joi Sommers as its heroine. Other books Baring It All: the Ins and Outs of Publishing; Signed, Sealed, Delivered … I’m Yours, a romance anthology; The Anthology of the Illinois Woman’s Press Association, a collection of the works of twenty-three women writers. Susan also writes for Garden Spices, a magazine focused on kaleidovision — seeing and experiencing the richness of diversity. She is a highly regarded community relations professional and the producer/host of the “Community Health Focus Hour” on WVON 1690AM, the Talk of Chicago