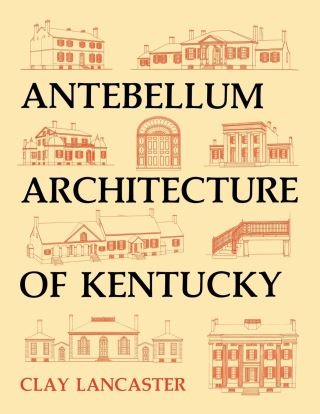 During the eight decades preceding the Civil War, Kentucky was the scene of tremendous building activity. Located in the western section of the original English colonies, midway between North and South, Kentucky saw the rise of an architecture that combined the traditions of nationally known designers, eager to achieve the refinements of their English mother culture, alongside the innovativeness and bold originality proper to the frontier. Tradition thus provided a tangible link with world architectural development, while innovation offered refreshing variations. The result was a distinctive regional architecture.

In his newest look at Kentucky architecture, Clay Lancaster broadens his scope to include analyses of significant structures from throughout the commonwealth, illustrating the entire range of stylistic development. Like his acclaimed earlier book Antebellum Houses of the Bluegrass, the current volume provides historical background as well as drawings, photographs, and floor plans, showing both general features and details.

Lancaster gives special attention to the Geometric Style, which evolved further and produced more noteworthy monuments in Kentucky than anywhere else in America. Such buildings, in turn, bestowed a simplicity and straightforwardness on structures in later styles.

As Lancaster shows, the architecture that resulted from Kentucky's fertile eclecticism constitutes a rich and rewarding architectural heritage. All lovers of fine architecture will treasure this handsome and informative book.