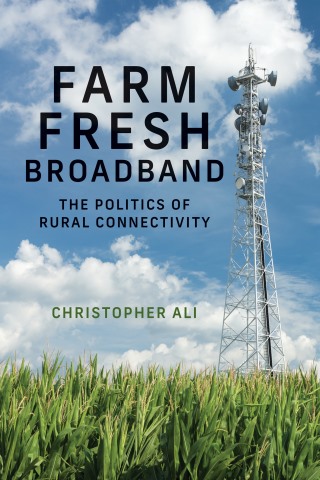 The Politics of Rural Connectivity

An analysis of the failure of U.S. broadband policy to solve the rural–urban digital divide, with a proposal for a new national rural broadband plan.

As much of daily life migrates online, broadband—high-speed internet connectivity—has become a necessity. The widespread lack of broadband in rural America has created a stark urban–rural digital divide. In Farm Fresh Broadband, Christopher Ali analyzes the promise and the failure of national rural broadband policy in the United States and proposes a new national broadband plan. He examines how broadband policies are enacted and implemented, explores business models for broadband providers, surveys the technologies of rural broadband, and offers case studies of broadband use in the rural Midwest.
Ali argues that rural broadband policy is both broken and incomplete: broken because it lacks coordinated federal leadership and incomplete because it fails to recognize the important roles of communities, cooperatives, and local providers in broadband access. For example, existing policies favor large telecommunication companies, crowding out smaller, nimbler providers. Lack of competition drives prices up—rural broadband can cost 37 percent more than urban broadband. The federal government subsidizes rural broadband by approximately $6 billion. Where does the money go?
Ali proposes democratizing policy architecture for rural broadband, modeling it after the wiring of rural America for electricity and telephony. Subsidies should be equalized, not just going to big companies. The result would be a multistakeholder system, guided by thoughtful public policy and funded by public and private support.

Christopher Ali: Christopher Ali is Associate Professor in the Department of Media Studies at the University of Virginia and the author of Media Localism: The Policies of Place. He is a Knight News Innovation Fellow with the Tow Center for Digital Journalism at Columbia University and former Fellow with the Benton Institute for Broadband & Society.