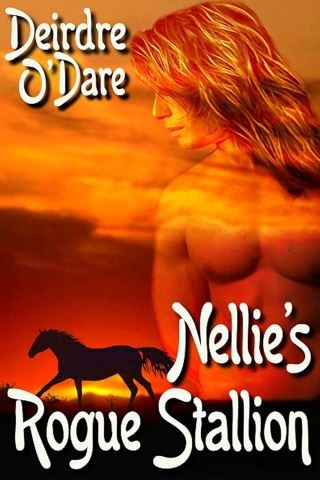 Nevada-raised Nellie Campbell despairs of ever finding love because her father fiercely guards her chastity, keeping all virile men yards away from her. When she joins the hunt to capture a rogue stallion that has been stealing valuable mares from area ranchers, she soon learns Rogue Red is no ordinary horse. No way can she allow her father and the cowboys to kill or geld this magnificent creature.

To help him escape, she soon finds herself racing across the desert on the red stallion’s back, knowing there can be no return. All her father’s care to keep her pure will now be for naught because Rogue Red is also Steven Johns, descendant of a long line of shape-shifting were-horses. As a man he is even more gorgeous than he is as a horse!

Grief over the brutal slaying of his family has driven Steven to live in horse form for so long, his human side has almost been forgotten. Feisty yet charmingly naïve, Nellie reminds him there is more to life than leading his mares through the wilds while fighting off predators and angry ranchers. But will her father ever abandon the chase with the ultimate goal of seeing him rendered harmless?

It will take a tragedy and a heroic rescue to convince Jack Campbell that the right man for Nellie and the rogue stallion are both more than they seem.