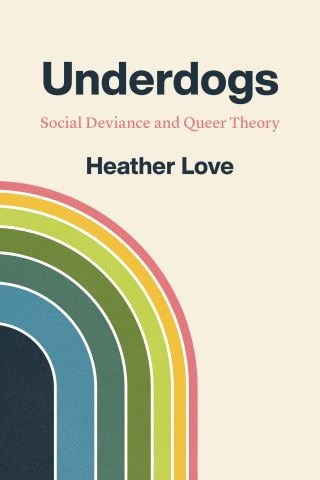 A pathbreaking genealogy of queer theory that traces its roots to an unexpected source: sociological research on marginal communities in the era before Stonewall.

The sociology of “social deviants” flourished in the United States at midcentury, studying the lives of outsiders such as homosexuals, Jews, disabled people, drug addicts, and political radicals. But in the following decades, many of these downcast figures would become the architects of new social movements, activists in revolt against institutions, the state, and social constraint. As queer theory gained prominence as a subfield of the humanities in the late 1980s, it seemed to inherit these radical, activist impulses—challenging not only gender and sexual norms, but also the nature of society itself.

With Underdogs, Heather Love shows that queer theorists inherited as much from sociologists as they did from activists. Through theoretical and archival work, Love traces the connection between midcentury studies of deviance and the antinormative, antiessentialist field of queer theory. While sociologists saw deviance as an inevitable fact of social life, queer theorists embraced it as a rallying cry. A robust interdisciplinary history of the field, Underdogs stages a reencounter with the practices and communities that underwrite radical queer thought.

Heather Love: Heather Love is professor of English at the University of Pennsylvania. She is the author of Feeling Backward: Loss and the Politics of Queer History.