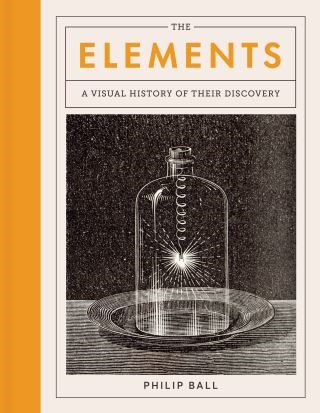 A Visual History of Their Discovery

From water, air, and fire to tennessine and oganesson, celebrated science writer Philip Ball leads us through the full sweep of the field of chemistry in this exquisitely illustrated history of the elements.

The Elements is a stunning visual journey through the discovery of the chemical building blocks of our universe. By piecing together the history of the periodic table, Ball explores not only how we have come to understand what everything is made of, but also how chemistry developed into a modern science. Ball groups the elements into chronological eras of discovery, covering seven millennia from the first known to the last named. As he moves from prehistory and classical antiquity to the age of atomic bombs and particle accelerators, Ball highlights images and stories from around the world and sheds needed light on those who struggled for their ideas to gain inclusion. By also featuring some elements that aren’t true elements but were long thought to be—from the foundational prote hyle and heavenly aetherof the ancient Greeks to more recent false elements like phlogiston and caloric—The Elements boldly tells the full history of the central science of chemistry.

Philip Ball: Philip Ball is a freelance writer and broadcaster whose many books on the interactions of the sciences, the arts, and the wider culture include Bright Earth: The Invention of Color, Curiosity: How Science Became Interested in Everything, Patterns in Nature: Why the Natural World Looks the Way It Does, How to Grow a Human: Adventures in How We Are Made and Who We Are, and, most recently, The Modern Myths: Adventures in the Machinery of the Popular Imagination, all also published by the University of Chicago Press. He lives in London.