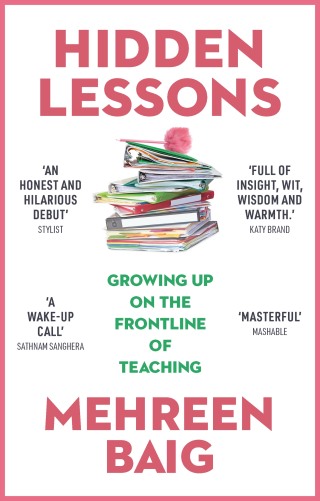 Growing Up on the Frontline of Teaching

'Beautifully written, Hidden Lessons is both a heart-rending account of the challenges in our education system, and a heart-warming celebration of teachers and students who have triumphed through adversity. The pride Mehreen has for her community and the lives she has touched is palpable.' - DAVID LAMMY
~~~~~~~~~~~~
You're in at 7am, there until 7pm and marking into the late hours. You've got one student who's a full time carer, another who's pregnant, and a third who's just joined a gang. You haven't got enough textbooks to go around, and one of the parents just called you an 'extremist'. You've just gone through a devastating heartbreak and you have to teach Romeo and Juliet to 30 hormonal 14 year olds.

Welcome to life as a teacher.

This is a world that all of us know, but most of us have completely forgotten. It's a world where you're working 50 hour weeks, but you're still just a part-time teacher because the rest of the time you're a security guard, a nurse, a counsellor, or a friend. It's also a world where you spend all day with some of the most interesting people you know. And even when the lesson plan has been abandoned, you're still learning.

Mehreen started teaching at 21, and by the time she left 10 years later she'd learnt a bit about teenagers and a lot about life. This is her story.

Mehreen Baig is a former teacher and trailblazing broadcaster and writer, who is passionate about education and empowering young women. Her move from teaching to broadcasting began in 2016, when Mehreen took part in the BAFTA-winning BBC2 documentary Muslims Like Us which followed a diverse group of Muslims living together in the same house. She has been invited to speak at conferences around the world including The Women's Economic Forum. In 2017 she was awarded the Reality and Constructed Factual BAFTA, and was named one of the most inspirational and powerful women of the year by the Telegraph.

She has presented a number of documentaries and has appeared as a regular reporter and guest for the BBC. In 2020 she emerged as an influential voice on a range of topics including feminism, race, gender equality and faith, appearing on The Truth About Cosmetic Treatments (BBC 1), Inside Chelsea: Britain's Wealthiest Borough (BBC 2) and her new podcast, The Secret Life of Teachers (BBC Radio 4). Mehreen worked as an English teacher in a North London secondary school after graduating from the Institute of Education and was promoted to a senior role within her first five years. She continues to work as a tutor and coach to help young people achieve their life goals.