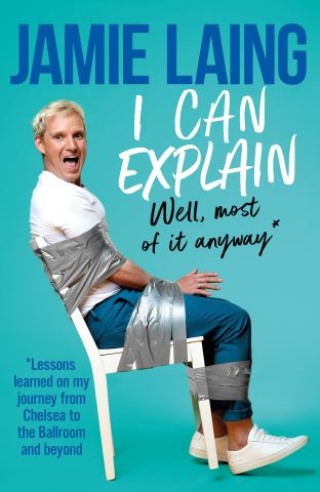 Funny, charming, and romantic to a fault, everyone loves Jamie Laing. The affectionate and exuberant blonde puppy dog has come a long way - and broken many hearts - since he first graced our screens in 2011 as the joker of the King's Road on Made in Chelsea. Ten years on, he became king of the ballroom making the final of Strictly Come Dancing. Now he's ready to spill the tea - and (McVitie's) biscuits - about life, love and everything in between.

From his idyllic upbringing in the countryside to the grey walls of boarding school, Jamie has always had a knack for getting himself into trouble. He reveals how he won popularity at school teaching the rest of the boys the proper way to ... [PARENTAL ADVISORY]. He hilariously recounts blagging his way into a casino aged 17, and winning so much money his mother thought he was a drug dealer. Jamie has been equally lucky with ladies, but not always quite the romantic hero he had in mind - unless sitting lovelorn outside a girlfriend's halls begging to be taken back while fending off abuse from drunk students calling out 'Made in Chelsea twat' counts as heroism?

Jamie also writes movingly about his struggles off camera, which left him crippled with anxiety and led to his eventual burnout. Throughout it all he opens up about the importance of friendship and how his two ride-or-dies, Georgie and Spencer, have always been there for him. They've enabled Jamie to thrive as a confectionery king and genuinely change lives with his Private Parts podcast, while not letting him forget that he took part in The Great Celebrity Bake Off for Stand Up To Cancer despite not knowing how to pronounce the word 'meringue'. Candid, entertaining, and almost always ridiculous, this is the real Jamie Laing.

Jamie Laing: JAMIE LAING is best known as one of the key members of the BAFTA-winning television series Made in Chelsea, first appearing in 2011 during its second series, and he hasn't looked back since. Jamie's career in entertainment has gone from strength to strength, seeing him star on Celebrity Hunted, Celebrity Great British Bake Off and Famous and Fighting Crime, as well as hosting the Private Parts podcast with MIC co-star Francis Boulle and 6 Degrees from Jamie and Spencer with Spencer Matthews. In 2020, Jamie went mainstream making it to the final of Strictly Come Dancing. When he's not on our screens, Jamie's busy in the confectionary business as founder of sweet brand Candy Kittens. And it's clear a taste for treats runs in his blood - his grandfather Sir Alexander Grant invented the digestive biscuit over 100 years ago. Jamie is currently hosting the BBC Three dating show I Like The Way You Move.