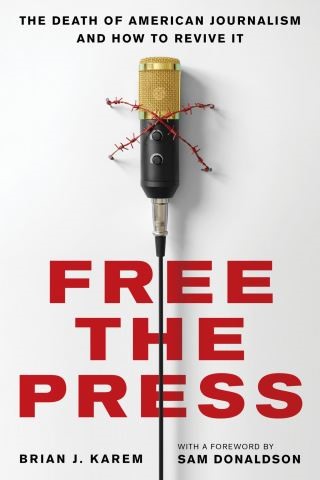 The Death of American Journalism and How to Revive It

Blending his experiences as a veteran reporter with analysis of the erosion of trust between the press and the government during the past 40 years, in Free the Press, renowned journalist Brian J. Karem gives readers a unique perspective on the challenges facing journalism while asking the question, “How did we get here?” And perhaps more importantly, “How do we fix it?”. Since the Vietnam War, each and every president has overseen the withering of relations between the Executive Branch and the so-called Fourth Estate. Politicians are not solely to blame, however. Corporate media has us following the news of the day for clicks and views rather than pursuing long term stories of impact. Reporters have ceased to frame the narrative and failed to co-opt social media contributions until it was too late.

Placed alongside a firsthand view of Karem’s own experience as a reporter and manager in television, print, and the online media industry, where he witnessed buyouts and the end of locally owned and operated newspapers; a behind-the-scenes look at his work as a member of the White House Press Corps; and his advocacy to protect the journalistic pillar of anonymity, readers will come away with a deeper understanding of journalism, and what happened to it, at the national and local level.

Karem concludes with a three-step plan to save the free press, as well as a comprehensive method to reporting for reporters to regain level footing and work toward repairing the damage done to one of the most important and sacred institutional relationships of our country.

Brian J. Karem is an award-winning journalist, author, and speaker. He has worked in both newspaper and television as an investigative journalist covering politics, crime, refugee issues, and state and local News. He is the recipient of the National Press Club’s Freedom of the Press Award, as well as the prestigious Pieringer Award. He has testified in support of a federal shield law to protect reporters with confidential sources, and is the founder of the “First Jailbird’s Club,” a group of 13 reporters who went to jail to defend the identity of a confidential source. Karem appears regularly as a political analyst on television, serves as the senior White House correspondent for Playboy, is a member of the White House Press Corps and National Press Club, and launched the popular podcast, “Just Ask the Question,” in 2018.