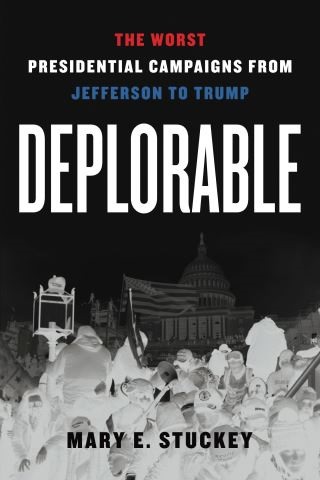 The Worst Presidential Campaigns from Jefferson to Trump

Political campaigns in the United States, especially those for the presidency, can be nasty—very nasty. And while we would like to believe that the 2020 election was an aberration, insults, invective, and yes, even violence have characterized US electoral politics since the republic’s early days. By examining the political discourse around nine particularly deplorable elections, Mary E. Stuckey seeks to explain why.

From the contest that pitted Thomas Jefferson against John Adams in 1800 through 2020’s vicious, chaotic matchup between Donald Trump and Joe Biden, Stuckey documents the cycle of despicable discourse in presidential campaigns. Looking beyond the character and the ideology of the candidates, Stuckey explores the broader political, economic, and cultural milieus in which each took place. In doing so, she reveals the conditions that exacerbate and enable our worst political instincts, producing discourses that incite factions, target members of the polity, encourage undemocratic policy, and actively work against the national democratic project.

Keenly analytical and compulsively readable, Deplorable provides context for the 2016 and 2020 elections, revealing them as part of a cyclical—and perhaps downward-spiraling—pattern in American politics. Deplorable offers more than a comparison of the worst of our elections. It helps us understand these shameful and disappointing moments in our political history, leaving one important question: Can we avoid them in the future?