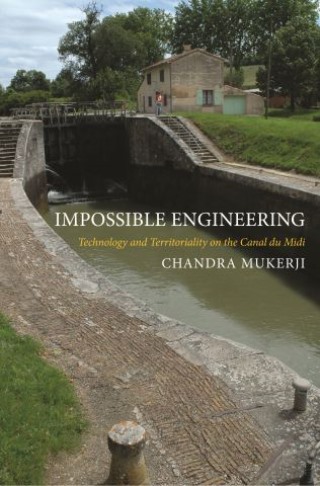 Technology and Territoriality on the Canal du Midi

The Canal du Midi, which threads through southwestern France and links the Atlantic to the Mediterranean, was an astonishing feat of seventeenth-century engineering--in fact, it was technically impossible according to the standards of its day. Impossible Engineering takes an insightful and entertaining look at the mystery of its success as well as the canal's surprising political significance. The waterway was a marvel that connected modern state power to human control of nature just as surely as it linked the ocean to the sea.

The Canal du Midi is typically characterized as the achievement of Pierre-Paul Riquet, a tax farmer and entrepreneur for the canal. Yet Chandra Mukerji argues that it was a product of collective intelligence, depending on peasant women and artisans--unrecognized heirs to Roman traditions of engineering--who came to labor on the waterway in collaboration with military and academic supervisors. Ironically, while Louis XIV and his treasury minister Jean-Baptiste Colbert used propaganda to present France as a new Rome, the Canal du Midi was being constructed with unrecognized classical methods. Still, the result was politically potent. As Mukerji shows, the project took land and power from local nobles, using water itself as a silent agent of the state to disrupt traditions of local life that had served regional elites.

Impossible Engineering opens a surprising window into the world of seventeenth-century France and illuminates a singular work of engineering undertaken to empower the state through technical conquest of nature.

Chandra Mukerji: Chandra Mukerji is professor of communication and science studies at the University of California, San Diego. She is the author of Territorial Ambitions and the Gardens of Versailles, A Fragile Power: Scientists and the State (Princeton), and From Graven Images: Patterns of Modern Materialism.