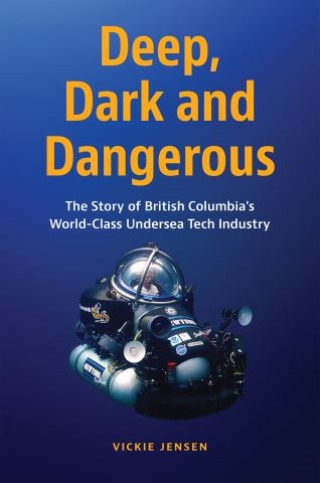 How British Columbia became an international hotspot for submarines, submersibles, Newt Suits, underwater robotics and a host of other cutting-edge undersea technologies.

In Deep, Dark and Dangerous, maritime historian Vickie Jensen explores the fascinating story of British Columbia’s rise to become a world leader in the underwater tech industry, tracing BC’s colourful history and bright future as a front runner in the world of subsea technology innovation.

This little-known saga began with the remarkable story of Pisces I. In the early 1960s, two commercial hard-hat divers from the Vancouver area, Don Sorte and Al Trice, and engineer Mack Thompson realized that they needed a small manned submersible with robot arms for deep-sea work. They couldn’t find one to buy, so they decided to build their own. Experts told them such things could only be built in specialized facilities and it would be suicidal to try a home-made version. Just over two years and $100,000 later their Pisces I was successfully making two-thousand-foot dives. The three innovators formed a company called International Hydrodynamics (HYCO) as orders started to arrive from around the world. In the process of building some fourteen submersibles, HYCO would serve as an incubator for a generation of experts that would launch an entire industry of subsea companies in BC.

Drawing on her background in documenting both history and industry, Vickie Jensen uncovers stories, both historical and current, detailing the submarines, submersibles, robots, torpedo recovery technology and inventions that are responsible for BC’s remarkable and continuing subsea reputation. Written with colour and flair, this is a fascinating and exciting story that anyone can enjoy.

Vickie Jensen has authored Saltwater Women at Work (Douglas & McIntyre, 1995) and Ships of Steel (Harbour Publishing, 2000) and co-authored Build Your Own Underwater Robot (Westcoast Words, 1997) and Underwater Robotics (MATE Center, 2010). She lives in Vancouver, BC.