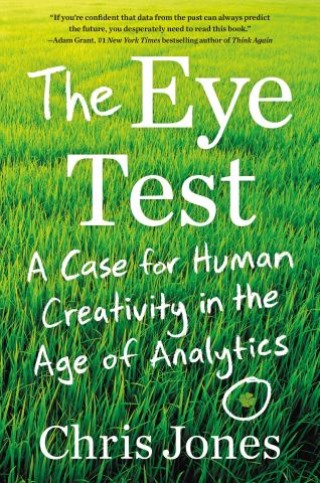 A Case for Human Creativity in the Age of Analytics

In a world increasingly ruled by numbers and algorithms, award-winning journalist Chris Jones makes a compelling case for a more personal approach to analytical thinking​.


THE EYE TEST is a necessary course correction, a call for a more balanced, personal approach to problem-solving. Award-winning journalist Chris Jones makes the case for the human element—for what smart, practiced, devoted people can bring to situations that have proved resistant to analytics. Jones shares what he’s learned from an army of extraordinary talents, including some of the best doctors, executives, athletes, meteorologists, magicians, designers, astrophysicists, and detectives in the world. There are lessons in their mastery.

Of course, there is a place for numbers in decision-making. No baseball player should be judged by his jawline. But the analytics revolution sparked by Michael Lewis’s Moneyball now threatens to replace one kind of absurdity with another. We have developed a blind faith in the machine, the way a driver overly reliant on his GPS might be led off the edge of a cliff. Not all statistical analysis is sound. Algorithms aren’t infallible, and spreadsheets aren’t testaments. Trust in them too much, and they risk becoming instruments of destruction rather than understanding.

Worse, data’s supremacy in our daily lives has led to a dangerous strain of anti-expertise: the belief that every problem is a math problem, and anyone given access to the right information will find the right answer. That taste doesn’t matter, experience doesn’t matter, creativity doesn’t matter. That we can’t believe our eyes, no matter how much they’ve seen.

THE EYE TEST serves as a reminder that if beauty is less of a virtue in the age of analytics, a good eye still is. This book is a celebration of our greatest beholders—and an absorbing, inspiring guide for how you might become one, too.

Chris Jones: Chris Jones, a former writer-at-large for Esquire magazine, has won two National Magazine Awards. He is the author of Out of Orbit and Falling Hard: A Rookie’s Year in Boxing. His work has also appeared in The Best American Magazine Writing and The Best American Sports Writing anthologies. He lives in Port Hope, Canada.