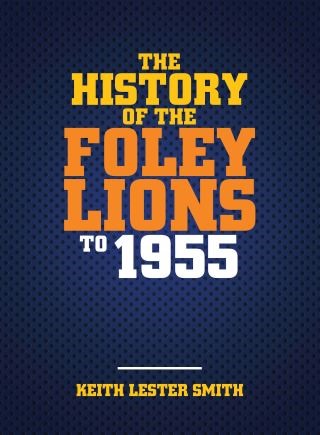 The History Of The Foley Lions To 1955

The town of Foley, Alabama was founded by John Burton Foley, a very successful businessman from Chicago, and was settled by individuals and families from all over our great nation. This community grew to love its football team and supported it passionately.

Through the perspective of Foley High School, we see one of the most tumultuous times in our nation’s history, a period that defined the history of the United States. These individuals lived through the Great Depression and two World Wars to emerge as the greatest and most powerful country in the history of our planet.

Our citizens, not only in Foley but also throughout every corner of our nation, were guided by a deep respect and reverence for the Bible. Our hope and prayer is that this book will serve as a reminder of our Christian heritage and the importance of seeking the guidance of our Creator in everything we do if we hope to remain free and strong.

Keith Smith was born to Lester and Elaine Smith in Foley, Alabama on Friday, September 29, 1967. His father became Foley’s head coach in 1969, and Keith was immersed in Foley football growing up. He graduated from Foley in 1986 and later from Faulkner University.

Keith returned to Foley in 1990 where he worked for 24½ years at Foley Middle School and Foley High School. In 16 years as the head football coach at Foley Middle, Keith led the Lions to seven county championships. His experiences in Foley gave him unique access to a plethora of information about Foley football.

Keith was married to the former Jaime Leigh Shutt in 1999, and the couple has three beautiful daughters – Abby, Lydia and Rachel. Keith is a deacon at the Foley church of Christ and is now working at Snook Christian Academy.