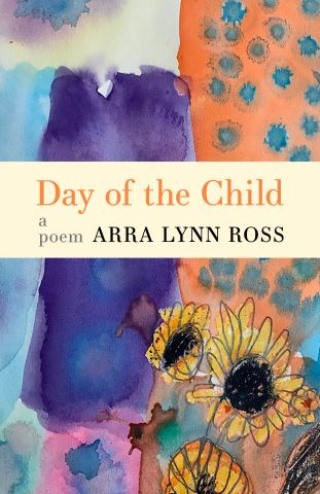 Day of the Child

From Arra Lynn Ross, a tender, generous, and generative extended poem centered on the experience of parenthood.

“What is learned? I’ll return for my son; / at school, at three thirty-eight, bells will ring & run / days over years.” Using unpredictable syllabics, rhyme, and syntax, Day of the Child captures the sensation of altered time that accompanies a child’s growth. Seasons come and go. A schoolboy becomes a dreaming infant becomes a five-year-old exploring metaphor for the first time becomes an ultrasound image, “a frieze on screen.” A mother cycles through her own often dissonant identities: “soother, watcher, blame-taker.” And both mother and child assume another, significant role: artistic collaborators.

For Day of the Child is a poem co-created by child and mother, offering a space in which each’s stories, thoughts, words—“unbound / by Time & time’s delineations”—tangle together. In which apartness—“Oh indivisible divisible,” the presence of another heart beating inside the mother’s own body—is continually negotiated. And in which the mother considers her place as intermediary between the child and the world: her protection, her complicity, her joy. Its octave pairs ebb and flow, expand and contract, producing a portrait of raising another human as refracted as it is circular, just as a river “breaks into many suns, the sun.” For, as the child asserts, “love is a circl[e] round / as a Ball.”

Challenging the notion that parenthood is not itself a poetic endeavor, Day of the Child makes of childrearing “a refrain I reframed each day with new words.”

Arra Lynn Ross: Arra Lynn Ross is the author of Day of the Child and Seedlip and Sweet Apple. She is a poet, essayist, and puppet worker whose work has appeared in Passages North, Fourth Genre, River Teeth, Denver Quarterly, Poetry Northwest, Prairie Schooner, Birmingham Poetry Review, Antioch Review, and the Iowa Review. She lives in Michigan.