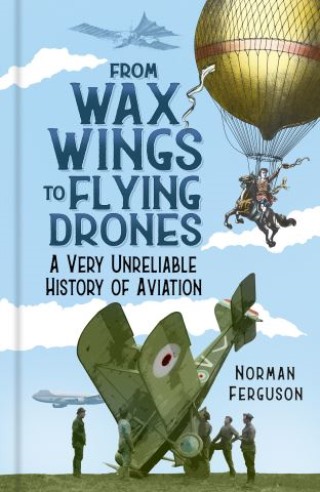 From Wax Wings to Flying Drones

A Very Unreliable History of Aviation

This playful history looks back at the story of flight since the first patient-to-be jumped from a castle parapet to the joy that is flying with a hen night to Prague.

It features all the important aircraft, pilots and defining moments that have echoed down the century and a bit since that first flight on a famous date in 1903. The book will answer all those questions that dog proper aeronautical historians: Was Keith Harris's Orville really named after the first ever flyer? What exactly is a 'Spitfire'? Why did Richard Branson try to cross the Atlantic in a balloon when he owned an airline?

Featuring all the great pioneers of flight, the Montgolfier Brothers, the Wright Brothers, Louis Bleriot, Charles Lindbergh, and more, there's plenty to absorb here for any aviation buff.

Norman Ferguson has been interested in aviation all his life. Born into a family of plane-spotters, one grandfather was an anti-aircraft gunner, the other a Blitz ARP warden, and his father was an intercept radar operator in the RAF. Norman was in the ATC and reached the heady heights of champion in Aircraft Recognition in 1982 (Scottish and Northern Ireland area). He has previously written The Little Book of Aviation, 5 Minute History: First World War in the Air and Project Apollo: The Moon Odyssey Explained for The History Press. He lives in Edinburgh.